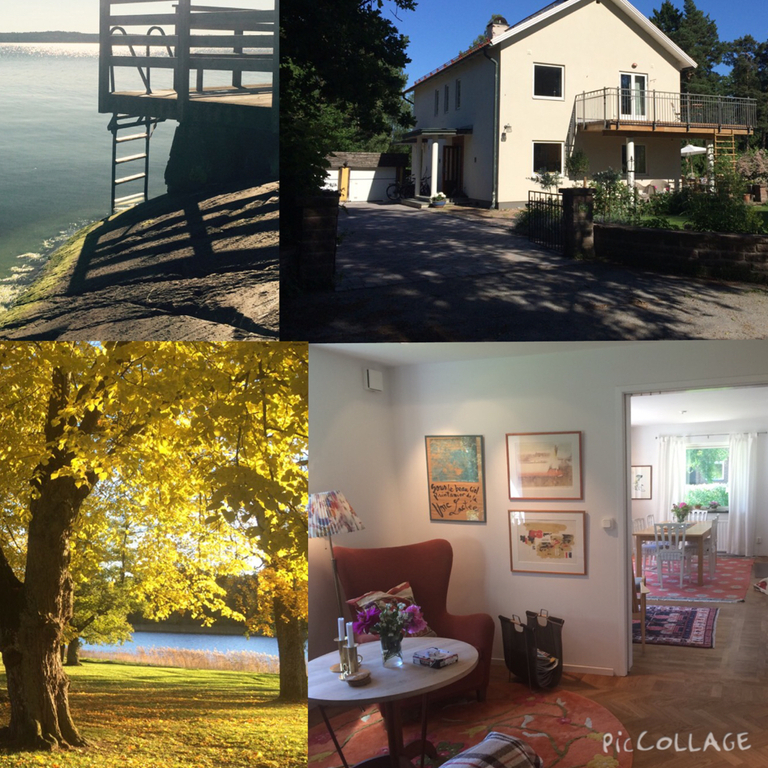 Our house and neighbourhood 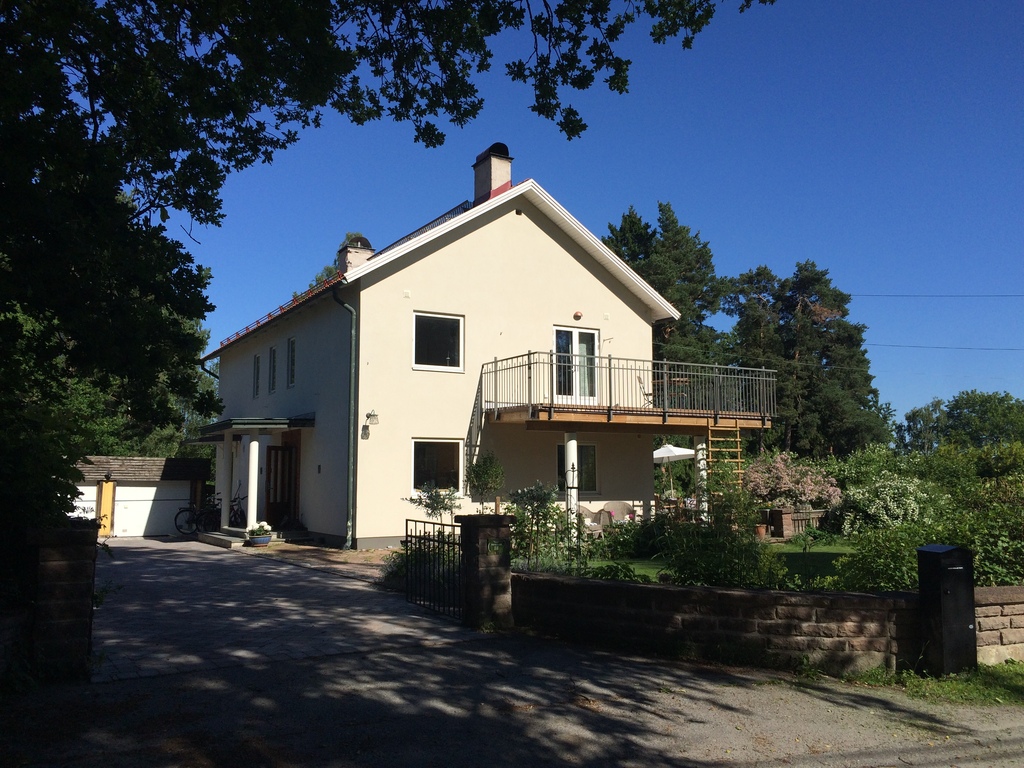 Welcome to our house

Our suburb is beautifully situated just 12 km north of Stockholm city center, in a park surrounding a castle from the 1700's. Our house is found on one of the most attractive addresses, a quiet and beautiful street making its way down to the water. We are a short walk away from a nice neighborhood beach, tennis lawns, playgrounds and a small shopping centre. A bike ride away (5 km), you find vast walking trails in the forest or along the coast, as well as a large shopping center. Also within walking distance (10 min) is the small commuting train station offering access to downtown Stockholm. The train takes 17 minutes.

Our house is 180 square meters divided over two floors. The ground floor consists of an entrance hall, a fully equipped kitchen, laundry facilities, and two adjacent living rooms with an open fireplace, and a bathroom. All five bedrooms are on the second floor, as well as a smaller bathroom, and a TV-room with a large flat-screen. Three rooms have a sea glimpse, one a fire place and access out to the balcony, where the sea-view and the sunset can be fully enjoyed.

With direct access from the living room on the first floor, is a large wooden deck facing south, towards the sea (sea glimpse) with a barbeque. The house issurrounded by a vast, flouring garden with big lawns for play and sport, with full privacy. At summer, the sun doesn´t set until around 10-11 pm.

We have a Citroën Grand Picasso seating seven people (2015) and prefer to also exchange cars.

There are several grocery stores and other shops in the neighbourhood, and in the small local shopping centre, where a café, a bakery, and other amenties also can be found. Only 3 km away is Täby Centrum, one of northern Europe´s largest and most modern indoor shopping malls (www.tabycentrum.se).
1 km from our house is a public beach (Näsaäng) and 2 km away is a public pool area (Norskogsbadet). There are many play grounds around.

Stockholm is widely regarded as one of the world’s most beautiful cities, built where lake meets sea (surrounded by the waters of the Baltic Sea and Lake Mälaren), on fourteen islands, with eight centuries of history and culture to choose from. The city is especially lovely in the summer due to the light summer nights. The sparkling blue water and the archipelago next door is what defines Stockholm and gives it its unique character. Wherever you look, there’s water. And since it’s so clean, you can use it for all types of activities, like fishing and even swimming in the middle of town.

The archipelago with its 30,000 islands and skerries plays a huge role in Stockholm’s appeal. It offers beautiful scenery and is easily accessible by both car and boat. You can read more about Stockholm on the Swedish Tourist Board´s website, http://www.visitsweden.com/ and http://www.visitstockholm.com/.

Love and respect for nature are key elements of the Swedish soul and sustainability is always high on the agenda in the capital of Scandinavia. 90-95% of Stockholm’s residents live within 300 meters of a park or the many recreational areas that creates green oases of air and space in the cityscape. This is where the locals go for picnics and barbeques, sunbathe and teach their kids to ride bikes. In the summer, the outdoor cafes are filled with people enjoying the long summer nights. And as always in Stockholm; all parks are clean, safe and accessible to all. The Royal National City Park is the world’s first and spans more than ten kilometers from north to south. It’s the most visited recreational area in the Stockholm region and only a stone’s throw from the city center of Stockholm. Djurgården Island is actually a part of this park.

Swedes generally understand and speak English close to fluently, probably due to the fact that all foreignTV-shows and films are subtitled, not dubbed, and that most families, including ourselves, have cable TV, offering a wide range of foreign channels.

Näsbypark, a suburb about 10 kilometres north of Stockholm city centre (a short train ride, 17 minutes), is beautifully located in Täby municipality, by the sea. It is a green, safe, calm, yet energetic neighbourhood, with an abundance of possibilities for a rich outdoor life, as well as for shopping, historical explorations and eating.

Our family consists of six people. The father, Lars, 52 years old. A civil engineer with a passion for outdoor sports, such as golf, tennis, sailing and downhill skiiing. And music, Lars plays the piano and occassionally the guitar. The mother, Henrika, 48 years, also an outdoorian, who loves walking, hiking, skiing and strolling in the forests for mushrooms and wild berries. We both enjoy gardening, and reading. We have both travelled the world as youngsters, but nowadays , our lives are centred around our house, garden and our children and all their sports. We love watching plays and enjoy Stockholm's rich cultural supply.
Mats is our eldest son, born in 2001. He play soccer and land hockey, and enjoys reading biographies about successful people. Agnes was born in 2002. She spends six days out of seven in the stables close to our home, where she rides, takes care of the horses, takes riding classes and gives classes to the smaller children. Ingrid was born in 2004. She plays soccer, sings in a church choir, and is part of a theatre group for young people. Otto, our youngest son, was born in 2006. He plays the guitar, but is the keenest soccer player of the all. Otto also plays tennis, and weekly enjoys a set of tennis with his father and friends at the nearby tennis lawns. Summers are mostly spent in our summer cottage in Dalarna, slightly north of Sweden, and Sweden's true, traditional, cultural heart. We share the cottage with Henrika's sister and parents. Last year we also got a small new family member, the cockerpoo Milo ( a dog).