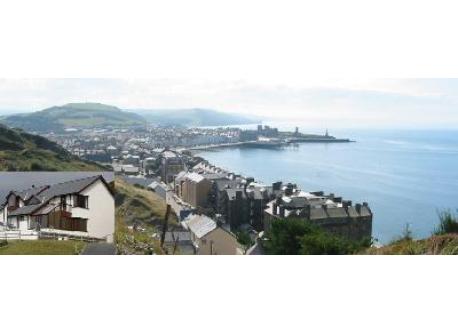 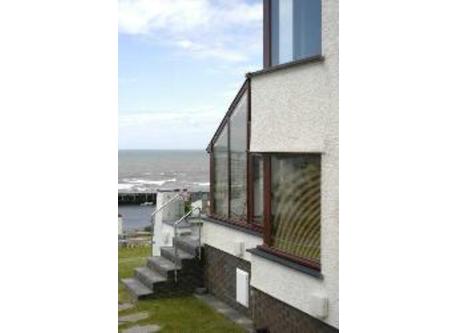 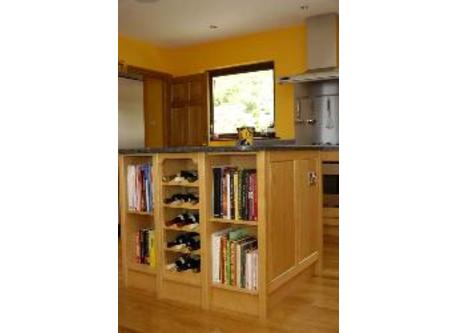 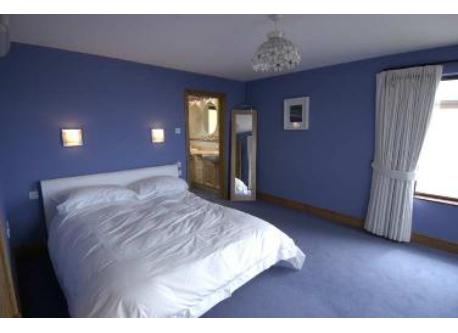 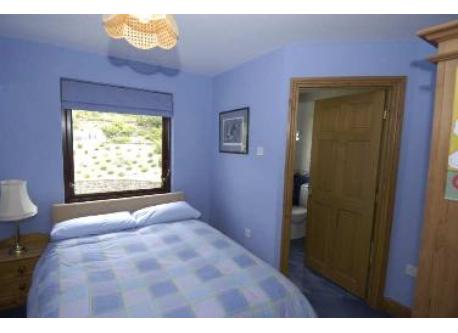 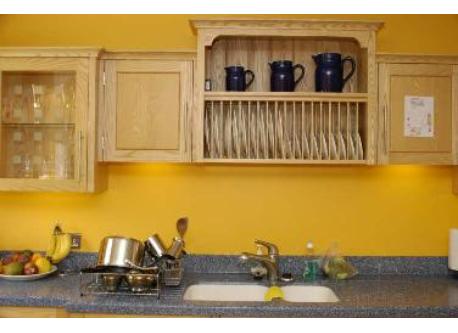 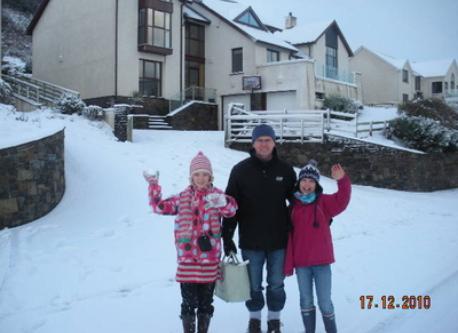 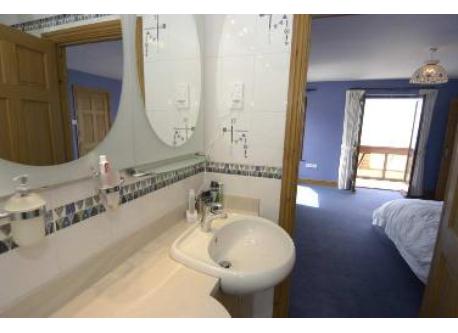 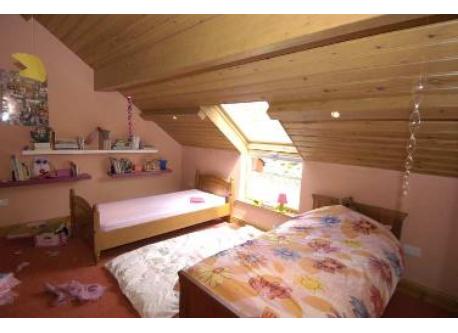 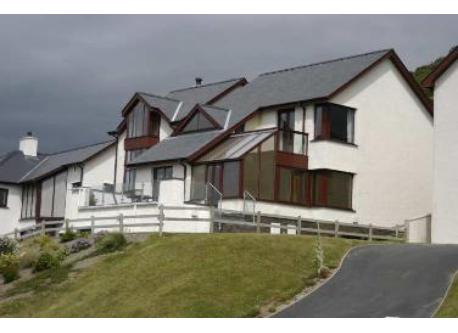 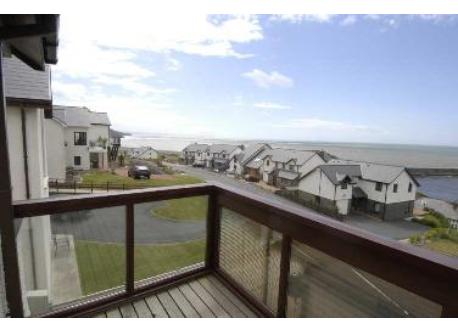 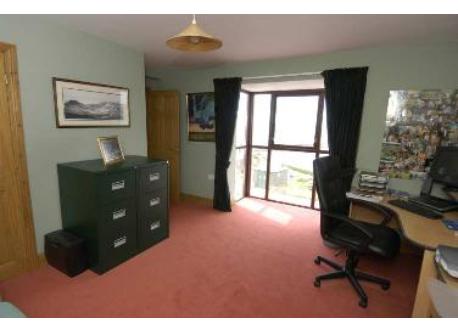 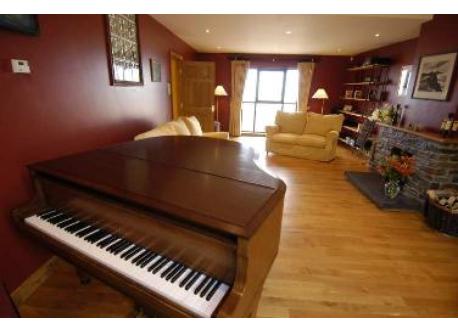 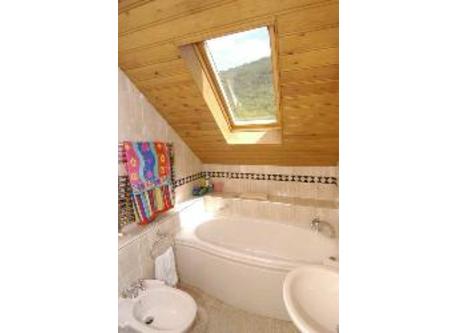 Our house which has featured in the UK "25 Beautiful Kitchens" magazine, as well as in a feature on the best 10 houses in Wales in the Western Mail, the Welsh national newspaper and in a television series on interesting homes in Wales.
We have solid oak floors  with under floor heating, a large garden on three levels and fantastic views over Aberystwyth harbour and Cardigan Bay

Aberystwyth is the principal holiday resort and administrative centre of the west coast of Wales. It is also home to the University of Wales Aberystwyth and the National Library. The town is nestled between three hills and two beaches, and hosts some castle ruins, a pier and a harbour. The surrounding hills hold the visible remains of a iron age fort and also a monument to Wellington and once climbed offer stunning views of Cardigan Bay. Aberystwyth is a University town ensuring it a vibrant throughout the year and not just during summertime. Incidentally, there are now ‘only’ fifty pubs left in Aberystwyth! The seafront hosts Victorian / Edwardian buildings mostly 4/5 stories high. The wide promenade protect the buildings from the revenges of the Irish Sea and offers space to sit, soak up the sun and view the surrounding hills and mountains which in winter are often covered in snow. On a clear day you may see the tallest mountain in Wales, Snowdon, which of course is the central feature of the Snowdonia National Park. The harbour was once one of the busiest in Wales and is fed by the rivers Ystwyth and Rheidol (which incidentally, is the steepest river in Britain). Geographically, Aberystwyth may be considered isolated from the rest of Wales. However, this isolation made it necessary for the local people to look after themselves and over the years it has acquired more resources than a town of this size would normally have. It is now the centre of local rural life and is visited by many to sample the numerous cafés, bars, and restaurants including, Chinese, Indian, Italian and Mediterranean cuisine. The local weather is dominated by the sea and the Gulf Stream which warms the whole region and makes for pleasurable visiting. The Castle Long before the Normans began their castle-building program, Iron Age settlers used the hilltop called Pen Dinas to build a huge fortification, which still dominates the skyline as you approach Aberystwyth from the south and reminds us of the skills of its ancient builders. The first Norman castle was a ringwork affair castle, built in the early 12th Century. Inevitably, the earth and timber defences proved too vulnerable and a new site was chosen for a castle in Aberystwyth itself. This time it was the Welsh, led by Llywelyn the Great who built the castle and it changed hands several times before finally became useless against new weapons. The last castle built at Aberystwyth once ranked among the greatest in Wales but today, lies entirely ruined and offering only a faint image of its once impressive past. How then did Aberystwyth Castle become such a ruin? Amazingly, as early as the 14th century, the concentric fortress began to decay. By 1343, large portions of the main gateway and drawbridges, and the outer bailey were falling down. The closeness of the castle to the pounding sea causing much of the decay. In 1404, Owain Glyndwr seized the crumbling fortress. Within a few years the English regained possession but after 1408, Aberystwyth Castle lost its strategic value to the monarchy, and only minor repairs were attempted. During the Civil War, the castle became a victim of Oliver Cromwell's ruthless policy of slighting because the garrison sided with the king, Charles I. Most of the castle stone was pilfered by locals to build their homes. The Railway The Aberystwyth Electric Cliff Railway is the longest electric cliff railway in Britain. It climbs Constitution Hill from the northern end of the town's promenade with trains running every few minutes during the spring, summer and early autumn. Reaching the summit reveals an amazing panorama which on a clear day extends as far as the Preseli Hills in Pembrokeshire to the south, while the whole expanse of Cardigan Bay opens out to the west and the mountains of Snowdonia to the North can also be seen. There is a café at the summit and the famous Camera Obscura. The present building is a recreation of the Victorian original. As the carefully-balanced mirror revolves, detailed views of the surrounding countryside are thrown onto the table in the centre of the building. The Cliff Railway also provides the simplest start to the beautiful walk over the cliff-tops to Clarach Bay, from where you can catch a bus back to Aberystwyth.